By The Conversation October 23, 2019 6 Mins Read
Help us spread the word

Turkey’s attack on Kurdish-run territory in northern Syria will likely snuff out a radical experiment in self-government that is unlike anything I have seen in more than 30 years studying the Middle East.

In a surprise Oct. 6 statement, President Donald Trump announced the U.S. would withdraw its troops from northern Syria.

Approximately 1,000 American soldiers had been stationed in that region as a buffer separating Kurdish forces – who had been working with the Americans in the fight against the Islamic State – from Turkish troops. Turkey feared that the Syrian Kurds would link up with Turkey’s Kurdish minority who have demanded autonomy or independence.

On Oct. 9, the Turkish military began its assault, pummeling Kurdish-held territory with artillery and airstrikes. Kurds are rapidly evacuating the region and at least 24 people have been killed in northern Syria. Retaliatory strikes from Syria have killed civilians in southern Turkey.

Take a long look at her: Hevrin Khalef, Secretary General of Syria’s Future Party. She wanted to unite people. She was 35 — my age. Turkish militants dragged her out of her car and shot her to death. Turkish state media lauded it as a “successful operation.”#TrumpBetrayedKurds pic.twitter.com/2PMc6TrIar

According to Turkish president Recep Erdogan, Turkey’s goal is to create a buffer zone separating Syria’s Kurds from the Turkish border.

But his country’s attack will do much more than that. If successful, it will destroy the most full-fledged democracy the Middle East has yet to see.

A different way to govern

The Kurds call their autonomous region in Syria “Rojava,” meaning “the land where the sun sets.”

Kurdish-led forces took possession of this swath of territory in northern and eastern Syria from direct Syrian government control in 2012. Then they successfully defended it against the Islamic State.

Kurdish Syria is a small portion of a territory, known as Kurdistan, that includes parts of Turkey, Syria, Iraq and Iran. Kurdistan is home to approximately 25-35 million Kurds, a cultural and ethnic minority in the Middle East.

The key to understanding the Rojava project, as those involved often refer to it, is the notion of “confederalism.” In this form of government, local units – in this case, Kurdistan’s “autonomous regions” – come together in a federation yet retain a great deal of autonomy.

Because sovereign power belongs to the local units and not to a central government, Kurdish confederalism differs from an American-style federal system. 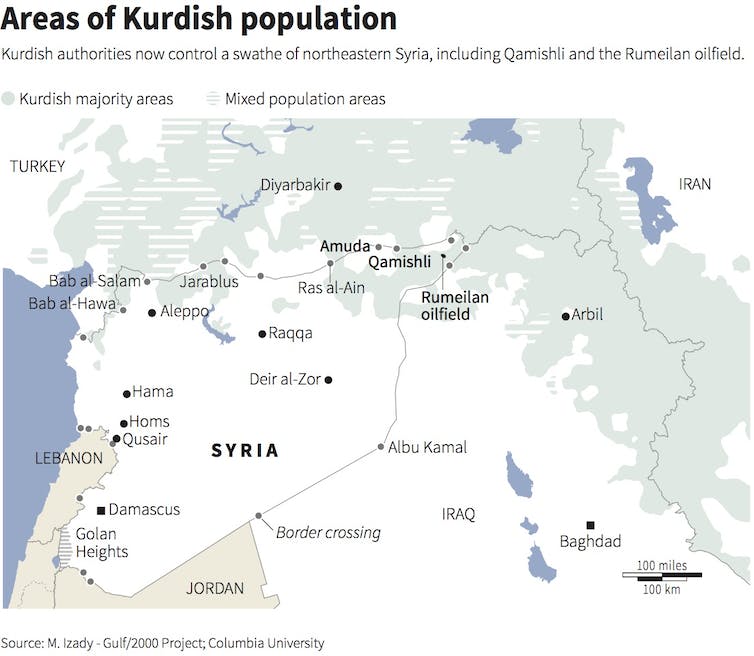 Kurds have established semi-autonomous regions in Iraq and Syria. In Iran and Turkey they live under central government rule. Reuters (2018)

The Kurds are so serious about devolving power to the local level that Rojava’s charter requires each of its three regions to have its own flag. And within each region, local elected councils are in charge. They organize garbage collection, adjudicate disputes and manage public health and safety.

Confederalism sets the Kurds apart from almost every other government in the Middle East.

Across the region, power is concentrated at the top. Syria’s president, Bashar al-Assad, is an authoritarian leader who has ruthlessly crushed his opponents in the country’s eight-year civil war. Egypt has a military government. Saudi Arabia has a king.

But Rojava would be an exceptional society almost anywhere.

Rojava’s charter guarantees freedom of expression and assembly and equality of all religious communities and languages. It mandates direct democracy, term limits and gender equality. Men and women share every position in government. Kurdish women have fought the Islamic State in Syria as soldiers in an all-female militia.

In a region where religion and politics are often intertwined, the Kurdish state is secular. Religious leaders cannot serve in politics. Rojava’s charter even affirms the right of all citizens to a healthy environment.

Surrounding countries, including Syria, also have constitutions with eloquent endorsements of political and human rights.

In Rojava, however, the constitution is actually in effect. Syrian Kurds have realized the dream of the 2010-2011 pro-democracy uprisings across the Arab world.

Internal cleavages in Syria’s Kurdish community undermine the Rojava project – namely, the perpetual jockeying for power between rival Kurdish clans and the struggle for preeminence among Turkish, Syrian and Iraqi Kurds.

The Kurds also have a troubled relationship with Syria’s Arabs and other groups. Beginning in the 1960s, the Syrian government began moving other populations to Kurdish territory to challenge Kurdish dominance there, sparking Kurdish resentment.

The devastation wrought by the Islamic State – such as the mass murder of the Yazidis, a religious minority within the Kurdish community, and sexual enslavement of their women – further fueled this resentment.

There have been numerous reports of Kurdish soldiers taking violent revenge against captured Islamic State members, alleged collaborators and even entire villages suspected of aiding the Islamic State enemy.

The Kurdish region of Syria also has some politically problematic origins.

The Syrian-Kurdish Democratic Union Party – Rojava’s leading political party – played an outsized role in the creation of Rojava. The party is affiliated with the Kurdistan Workers’ Party, or PKK, a far-left militant group that has fought against the Turkish government, first for the independence of Kurds from Turkey in the 1980s and 1990s, then – in the early 2000s – for their autonomy within Turkish borders.

Many Kurds in Rojava consider PKK founder Abdullah Ocalan a national hero. It was Ocalan who came up with the idea of confederalism in the first place, back in 2005.

But both Turkey and the United States consider the PKK to be a terrorist organization. The PKK is currently conducting an insurgency against the Turkish government.

The Rojava project is now in imminent peril.

Even if Turkey hadn’t launched its military offensive, Rojava would probably still have a tenuous future.

[ Insight, in your inbox each day. You can get it with The Conversation’s email newsletter. ]