By The Conversation February 28, 2021 6 Mins Read
Help us spread the word

The storming of the Red Fort in Delhi on January 26 marked an escalation of tensions between the Indian government – led by Prime Minister Narendra Modi – and farmers who have been protesting against agricultural reforms since August 2020.

With footage of the farmers clashing with police going viral, the Red Fort incident also marked a spike in interest in the farmers’ movement around the world, much to Modi’s embarrassment.

The authorities’ response to events at the Red Fort – a historic building symbolic of Indian independence, and located in the very heart of Old Delhi – was swift. Delhi Police shut down the city’s internet, affecting more than 52 million mobile phone subscribers. The shutdown was ostensibly in the interest of public safety, but it’s also the latest episode in India’s long-running story of heavy-handed internet crackdowns – a strategy used time and again to quell swelling protest movements.

India’s control over the internet is comparable to some of the world’s most authoritarian countries. While India ranks second in the world in terms of mobile internet subscribers, the country also leads in shutdowns. They’re used with alarming regularity to disrupt protest movements and – in the case of Kashmir, currently under the world’s longest internet shutdown – to control entire populations.

During the Citizen Act protests last year, shutdowns were used in Aligarh – home to the Aligarh Muslim University – one of the hubs of the protests, where severe police brutality is alleged to have taken place. The Indian government implemented more than 106 internet shutdowns in 2019 alone – the vast majority in response to protests.

This control is largely achieved via the Temporary Suspension of Telecom Services (Public Emergency or Public Safety) Rules, passed into law in 2017, which expanded the government’s powers for surveillance and connectivity suspension, empowering it to control dissent and opposition.

In Kashmir, where there are tight restrictions on the rights to free expression, speech, and assembly, internet shutdowns function as an “invisibility cloak” to crackdown on dissent and isolate Kashmiris from the rest of the world. Because India’s supreme court has ruled that “indefinite internet shutdowns” are illegal, India’s government instead downgrades or “throttles” Kashmir’s mobile connectivity from 4G to 2G, seriously limiting what can be loaded on phones.

The recent events at the Red Fort also presented an example of India’s disinformation ecosystem. At a pivotal moment, some protesters raised a flag sacred to Sikhs next to the Indian flag, even as movement leaders pleaded with them to climb down. Hundreds of cameras caught the moment the flags were raised, uploading photos to social media.

These images were immediately seized upon by social media influencers loyal to Modi, who began a disinformation campaign that spread across the country, claiming the flag to be that of Khalistani separatists. In Modi’s India, separatists are often depicted as enemies of the state. 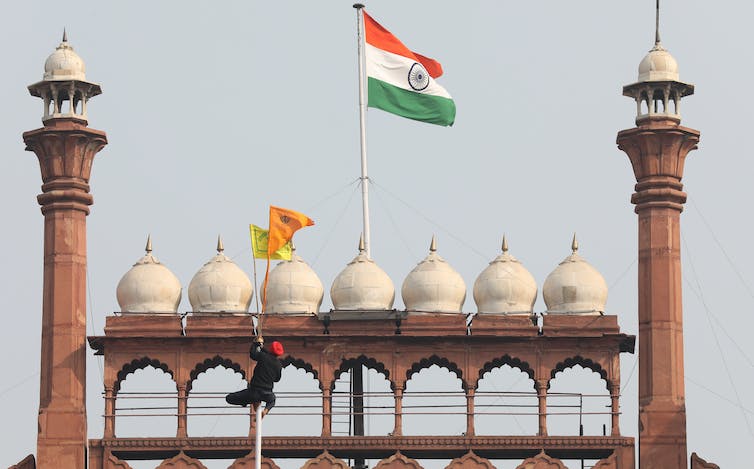 Disinformation spreads particularly quickly in India, where mobile internet packages make it cheaper to access social media than to run a Google search. This lack of “net neutrality” – favoring traffic to certain websites over others – discourages users from fact-checking what they see on social media.

In response to the fast-spreading flag disinformation, social media activists sympathetic to the farmers were quick to point out that the flag was the Sikh “Nishan Sahib”. They showed how the same flag is flown at all Sikh gurudwaras, used by regiments of the Indian army, and had even been sported by Modi while he campaigned in Punjab. It’s unclear how successful these efforts to neutralize “fake news” have been in a country with powerful state-backed media companies.

Television anchors on state-backed news channels regularly tarnish protesting farmers as Khalistani separatists, Pakistani spies, members of the opposition Congress party, or communists. Using abusive words such as “behuda” (impudent), “badtameez” (ill-mannered), and “gunda” (goons), these anchors are aware that their language will inflame passions when cut into shorter clips for social media. These images achieve virality on WhatsApp and Facebook via common channels of circulation, drumming up support for the state’s crackdowns on dissent.

As with the flag dispute, India’s activists also know how to use the digital space to achieve their objectives. They post videos, release their own memes and hashtags, and are particularly strong at satire, humour, music and art.

By positioning cameras at key protest sites, clashes are recorded and live-streamed on social media, capturing alleged police brutality and heightening the pitch of public debate. Unfortunately, such tactics are often nullified by the state’s common default to full internet shutdowns.

And in a further move to shut down dissent, the government recently reportedly sent a legal notice to Twitter that led to the blocking of several accounts linked to the farmers’ protest – revealing the Modi administration’s ability to censor groups and individuals on specific platforms, too.

Beyond signalling the authoritarian drift of the “world’s largest democracy”, India’s internet shutdowns are also expensive affairs. Even as Modi promises to build a “digital India” to boost the country’s economy, his internet shutdowns are costing India US$2.8 billion (£2 billion) a year – which equates to 70% of the global cost of shutting off the internet in 2020. That he is willing to foot this bill is indicative of how much is at stake for Modi. It is time for the world to take notice.