The Keeling Curve and 40 years of blah blah blah.

By Bergensia February 3, 2022 2 Mins Read
Help us spread the word

Wikipedia: The Keeling Curve is a graph of the accumulation of carbon dioxide in the Earth’s atmosphere based on continuous measurements taken at the Mauna Loa Observatory on the island of Hawaii from 1958 to the present day. The curve is named for the scientist Charles David Keeling, who started the monitoring program and supervised it until his death in 2005.

Keeling’s measurements showed the first significant evidence of rapidly increasing carbon dioxide (CO2) levels in the atmosphere.[1] According to Naomi Oreskes, Professor of History of Science at Harvard University, the Keeling curve is one of the most important scientific works of the 20th century.[2] Many scientists credit the Keeling curve with first bringing the world’s attention to the current increase of CO2 in the atmosphere.[3]

The measurements collected at Mauna Loa Observatory show a steady increase in mean atmospheric CO2 concentration from 313 parts per million by volume (ppmv) in March 1958 to 406 ppmv in November 2018,[15] with a current increase of 2.48 ± 0.26 (mean ± 2 std dev) ppmv CO2 per year.[16] This increase in atmospheric CO2 is due to the combustion of fossil fuels and has been accelerating in recent years. Since CO2 is a greenhouse gas, this has significant implications for global warming. Measurements of CO2 concentration in ancient air bubbles trapped in polar ice cores show that mean atmospheric CO2 concentration was between 275 and 285 ppmv during the Holocene epoch (9,000 BCE onwards) but started rising sharply at the beginning of the nineteenth century.[17]

The Keeling Curve also shows a cyclic variation of about 5 ppmv each year corresponding to the seasonal change in the uptake of CO2 by the world’s land vegetation. Most of this vegetation is in the Northern hemisphere where most of the land is located. From a maximum in May, the level decreases during the northern spring and summer as new plant growth takes CO2 out of the atmosphere through photosynthesis. After reaching a minimum in September, the level rises again in the northern fall and winter as plants and leaves die off and decay, releasing CO2 back into the atmosphere.[10][12]

On May 9, 2013, the daily mean concentration of CO2 in the atmosphere measured at Mauna Loa surpassed 400 parts per million (ppmv).[24] Estimates of CO2 during previous geologic eras suggest that CO2 has not reached this level since the mid-Pliocene, 2 to 4 million years ago.[25] 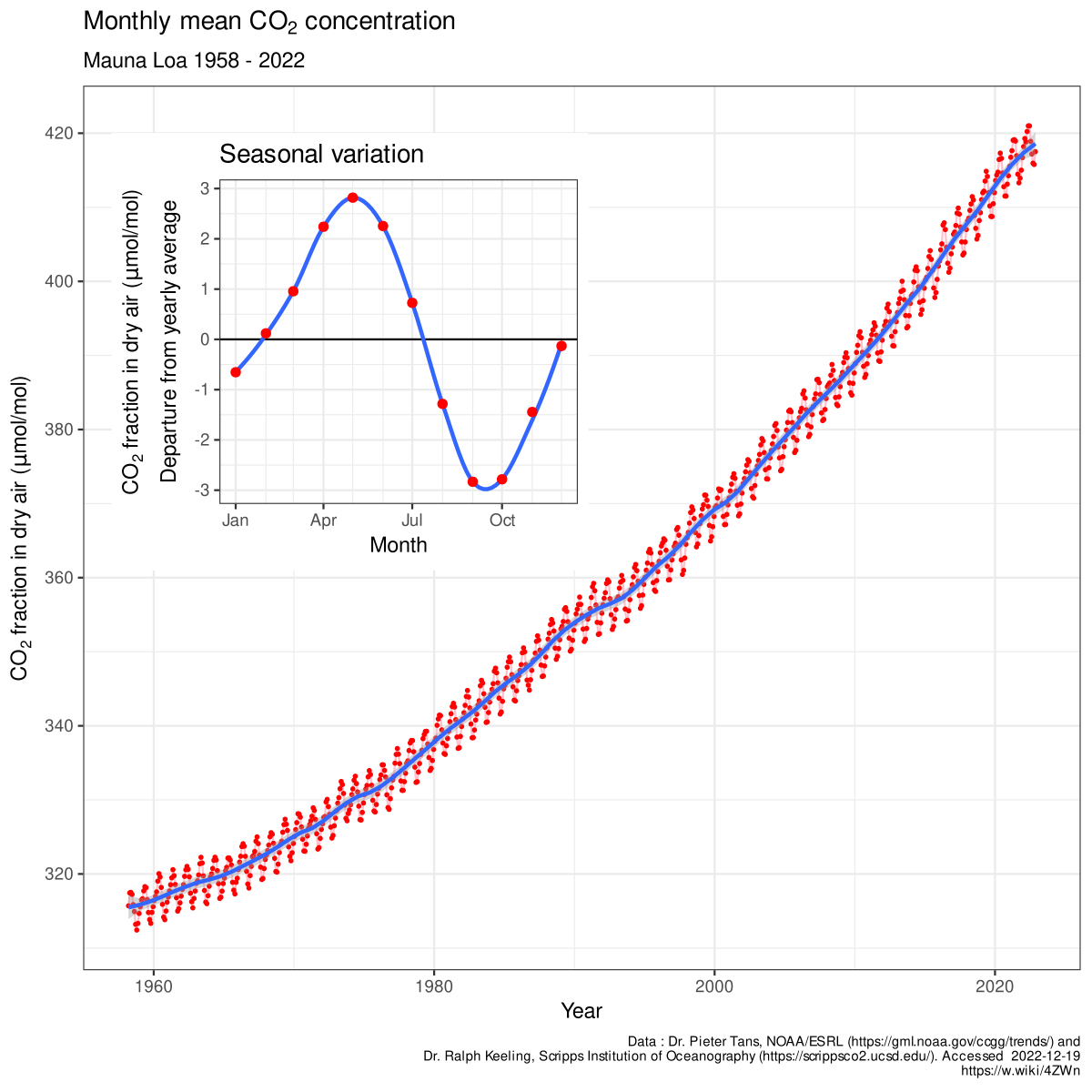