Kavanaugh is a reminder: Accused sexual harassers get promoted anyway

By The Conversation October 10, 2018 5 Mins Read
Help us spread the word

https://www.brettkavanaugh.com/ if you have experienced sexual assault and need assistance.

About a week after hearing emotional testimony from accuser Christine Blasey Ford and a limited FBI investigation, the Senate narrowly voted to confirm Brett Kavanaugh to the U.S. Supreme Court.

For millions of American women – both those who’ve survived assault and those who have experienced workplace harassment – seeing a man promoted despite credible allegations is jarring yet painfully familiar.

Sadly, this brand of discrimination has been undermining equality in the workplace for decades. 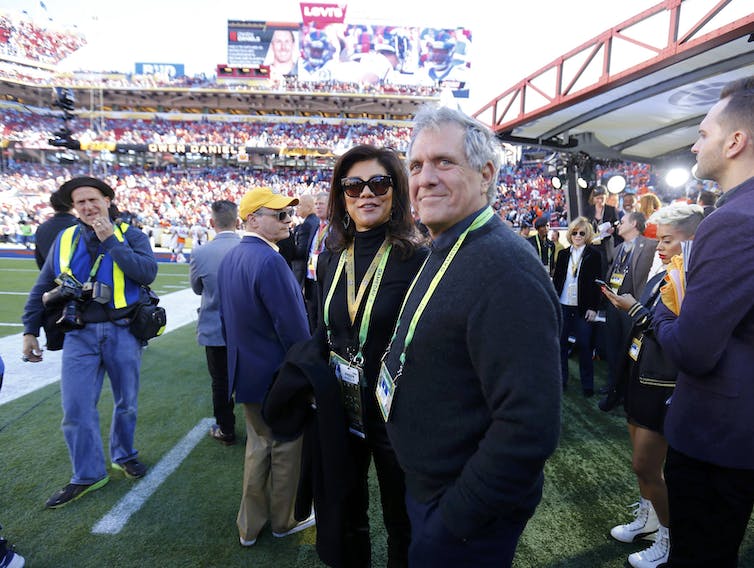 Les Moonves left CBS on his own terms long after several women accused him of sexual assault. Reuters/Mike Blake

At the Sept. 27 hearing, Sen. Dianne Feinstein referred to the proceedings as a “job interview.”

Her purpose was to distinguish the hearings from a criminal trial. But the comment reflects how the #MeToo movement represents a broader indictment of employment practices in the U.S.

The movement burns at two levels. The first is the harm and terror inflicted on those who have experienced sexual harassment or assault. Americans have been hearing these accounts for years, and they all hurt.

I listened to Dr. Ford’s testimony while waiting to board a plane. One senator asked her what she remembered most about the assault. “Indelible in the hippocampus is the laughter, the uproarious laughter between the two,” she said, referring to Kavanaugh and a friend, “and they’re having fun at my expense.”

I took off my headphones. You could hear her pain, right there on the surface, despite the passage of decades.

The second, slower #MeToo burn is a deeper resentment over the status of women in the workplace. Each new revelation of a prominent man’s past misconduct raises doubts about the story companies have been telling us about their commitment to equal opportunity for all these years. 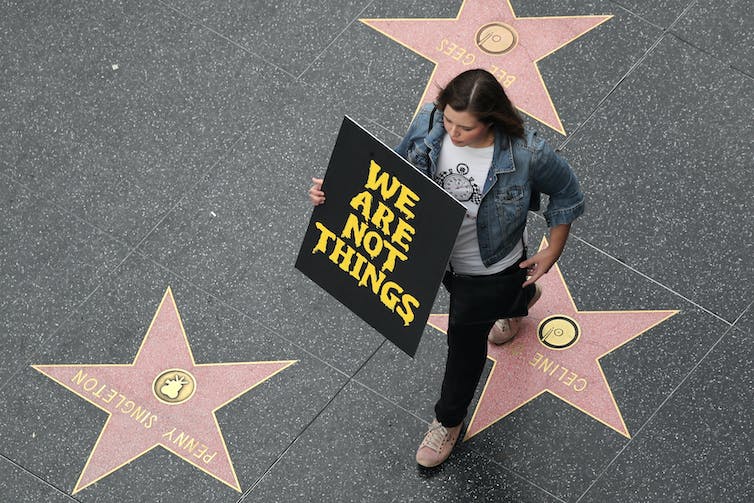 Some wonder how the #MeToo movement has changed our culture – or if it has at all. Reuters/Lucy Nicholson

It’s about discrimination too

This is a problem that people of color know all too well.

As someone who studies employment discrimination, I admit that before the #MeToo movement, even I was too willing to settle for various excuses for the continued gender pay gap. And the reality that female CEOs are so rare that they are outnumbered by men named “John” who run companies.

Maybe women just weren’t leaning in, as Facebook’s Sheryl Sandberg recommended in her 2013 book. Maybe we were too willing to accept a lower salary or select lower paying jobs over others. Maybe it’s the price we pay for taking care of our children.

Women were led to believe that the game was fair, that we lost for folding early or not betting enough. 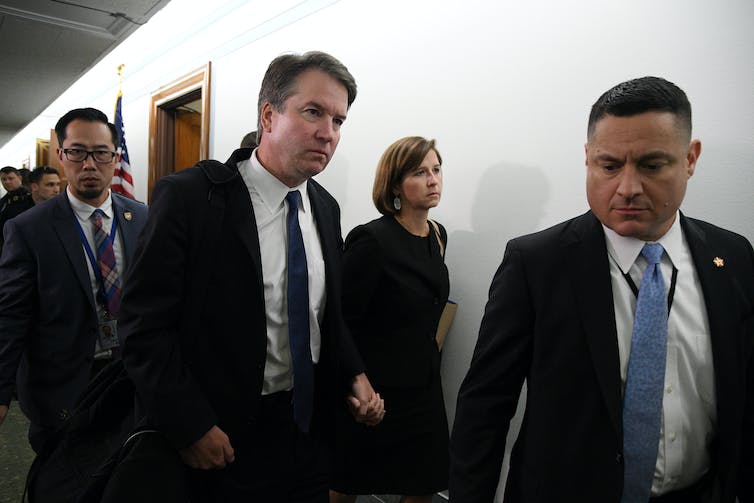 Kavanaugh walks out of the Senate after the combative hearing with his accuser. Reuters/Mary F. Calvert

The #MeToo movement has exploded that myth.

To be sure, some of the men dethroned for harassment may have done so entirely in secret, and their victims did not go public until recent months. But other harassers withstood complaint after complaint as they rose up the ranks, becoming notorious in their workplace or industry.

In 1997, for example, a woman fired by Moonves in retaliation for rejecting his advances hired a lawyer, who confronted the company. The case was settled quietly, and Moonves’ upward trajectory continued – until he was finally ousted in September.

Harvey Weinstein’s behavior was so notorious that his employment contract actually imposed a financial penalty for further harassment. His eventual downfall came in October 2017, only after The New York Times published an expose of his misconduct.

And of course, there was Clarence Thomas, who was confirmed to the Supreme Court despite Anita Hill’s testimony against him. 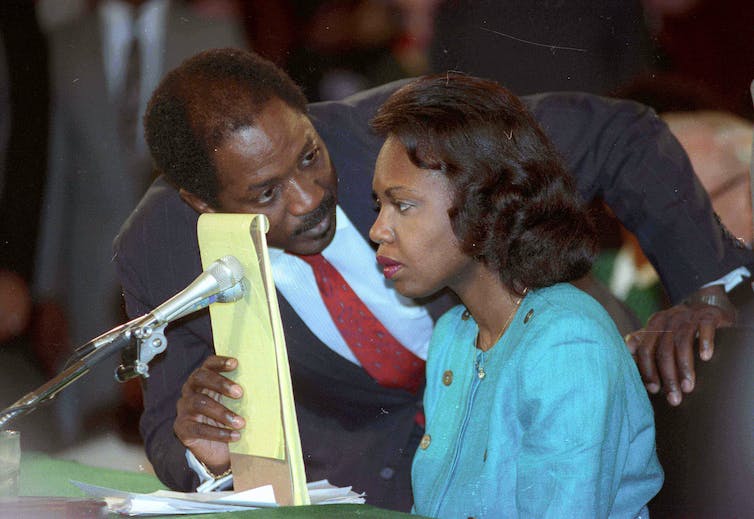 Complicity in the workplace

Since April 2017 alone, more than 200 powerful men have been accused of past sexual misconduct. It seems incredibly unlikely that all of those employers were in the dark about those bad acts when they decided to elevate them over the years.

That raises questions, in my mind, about whether the decision-making process that led to their hiring or promotion was fair. And whether employers have been serious about their espoused commitment to equal opportunity in employment, guaranteed by Title VII of the Civil Rights Act.

Normally these deliberations happen behind closed doors, where you see the result but not the questionable process behind it. With Kavanaugh, the process occurred on live television.

Lost in the shuffle are all the qualified candidates on President Donald Trump’s original list, whose resumes were not marred by a public sexual assault scandal.

In many workplace harassment scandals, there is often more than one victim. The one who has been harassed. And the more qualified candidate who deserved the job.

This is an update to an article originally published Sept. 28 to reflect the confirmation of Kavanaugh to the Supreme Court.

Net-zero by 2050 will hit a major timing problem technology can’t solve. We need to talk about cutting consumption