By The Conversation January 12, 2021 7 Mins Read
Help us spread the word

After weeks of President Donald Trump’s baseless claims about voter fraud and other improprieties costing him the presidential election, Washington erupted in chaos today as his supporters stormed the Capitol during a joint session of Congress to certify the results.

Trump has spent weeks insisting the election was stolen, with very little push-back from the Republican Party. There have been some notable people who have challenged him, but even while this riot was going on, there were more than 100 Republican lawmakers trying to block certification of the election. This has been a highly opportunistic process on the part of Republican legislators.

For Trump, this is the whole game; at this point, it seems there is nothing else he cares about. He is desperately trying to hang on to power.

Amid all of this, it was inevitable at least some Americans would take the word of their current president very seriously. Having fired them up in this way, it becomes much harder to control mob behaviour. His belated tweet telling protesters to go home and go in peace (now removed by Twitter) was far too little, too late.

Looking at some of these images coming in from Washington, there is almost an element of “cosplay” (“costume play”). A lot of the rioters were dressed up in bizarre paraphernalia. On some level, I think they know they can’t actually seize power. There’s almost this carnival element to it of these people delighting in causing complete chaos. 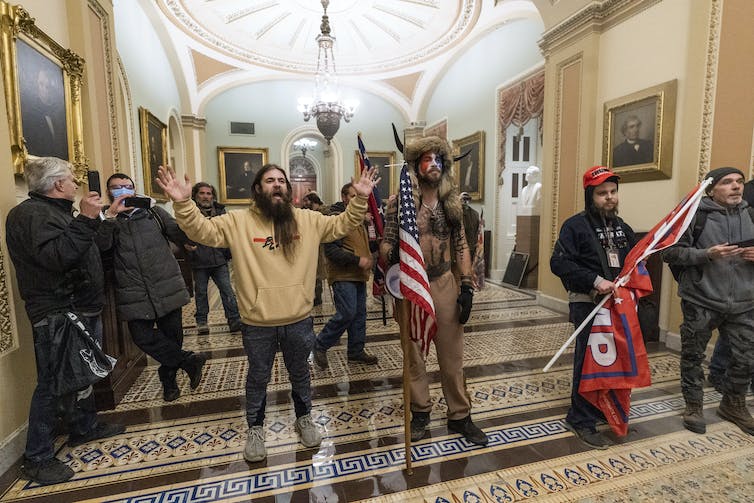 Whether it’s Trump or his rioting supporters, if they can’t get their own way, if they can’t win, they’ll just create as much chaos as possible and revel in the absurdity of it.

Another thing that’s very obvious is these protesters didn’t fear the police. They were able to push their way past the police, they were able to force entry into the Capitol building and they’re then making jokes with reporters. They believed the police would not retaliate against them fatally — although four people died, including one woman who was shot by police.

I can’t even put into words how this makes me feel when I personally know the anxiety felt by Indigenous people, Black people & the prep undertaken when there’s an #Indigenous or #BLM rally knowing there will be a combo of violence, batons, dogs, water hoses, tear gas & guns! https://t.co/wT1xL5ruNZ

Undermining election results at all costs

In storming the Capitol and trying to stop a legitimate process of certifying the election, the rioters are following the lead of Trump and many congressional Republicans. It’s been trend for a while for Republicans that if they lose an election, they do as much as possible to nullify the results.

This is not necessarily trying to overturn the result. But if you look at recent elections in North Carolina and Wisconsin where Democratic governors won, that was followed by Republicans in the legislatures stripping as much power as possible from the governorship.

This idea that an election is only legitimate if we win has been put into practice by Republican legislators across the country for quite a while now.

Read more:
In Trump election fraud cases, federal judges upheld the rule of law – but that’s not enough to fix US politics

With Trump’s loss to Joe Biden in November, there have been very few Republicans who have actually acknowledged this was the will of the people.

Part of that is because Trump’s victory four years ago was so unexpected, a lot of Republicans believe this was a new era in American politics. Part of that was the ability of Trump to win without actually winning the popular vote. Now that Biden has won, there’s a real unwillingness to acknowledge elections can still be lost legitimately by Republicans.

A failure of leadership from senior Republicans

From the beginning, Kevin McCarthy, the number one Republican in the House of Representatives, was absolutely behind these ridiculous stolen election claims. He’s never backed away from them.

Mitch McConnell, the Senate majority leader, let these things go on for weeks before he made the most minimal statement that the Electoral College has spoken. It is no surprise that McConnell was then completely unable to control Republicans in the Senate who wanted to contest the certification of the election results.

Republicans have learned the lesson that the way to get the most attention, the way to further your career, is to take the most pro-Trump stance possible. So, it was no surprise so many lawmakers would back this effort to block certification of the election. They’re raising money off this, they’re creating YouTube videos to show their supporters.

It’s become Trump’s party. A lot of people see the path to political advancement backing Trump at every point.

There were a lot of Republican legislators who hoped Trump would eventually give up. In the days after the election, some were saying we should let Trump play out his legal options, he will do the right thing eventually and he’ll step aside for the good of the nation.

But he was never, ever, ever going to step aside or concede. What he does is he just keeps people on board with him. Anyone who waits for Trump to do the right thing inevitably ends up supporting him when he does the wrong thing.

This is a lesson Republicans should have learned, but they’re scared of his supporters. None of them have supporters who would potentially risk their lives to storm the Capitol building.

The best check on power? The people

There have been surprises in both the strengths and weaknesses of America’s institutions over the last few years. For example, federalism has turned out to be quite an effective check on presidential power when it’s been exercised by someone like Trump, which is perhaps not something Democrats would have necessarily believed before.

On the other hand, we’ve seen this massive erosion of norms, especially in Congress. This has been going on for quite a while and McConnell has been one of the major eroders of norms for a long time. Congress was never really an effective check on Trump.

Read more:
Joe Biden wins the election, and now has to fight the one thing Americans agree on: the nation’s deep division

Ultimately, after the election, it was local and state officials like Georgia Secretary of State Brad Raffensperger and Aaron Van Langevelde, a member of Michigan’s board of state canvassers, who said enough is enough when members of Congress weren’t doing it.

And despite the fact Trump has packed the federal courts and Supreme Court with conservative judges, none of his legal challenges went anywhere.

But in the end, the lesson is the most effective check is the election. It is the voice of the people. For every norm that Trump broke, for every anti-democratic thing he did, there was a bigger backlash.

We saw an election with one of the biggest turnouts in history. We had four years of pretty consistent protests in the streets. And in the end, this is the most important check on the presidency that there is.